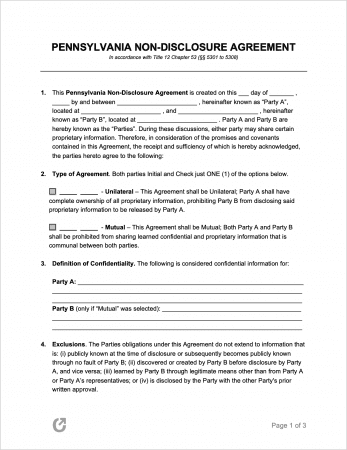 The Pennsylvania Non-Disclosure Agreement (NDA), is a binding agreement formed between a business and another entity that legally requires any learned trade secrets to be kept solely between those included in the agreement.

For unilateral agreements, the sharing party known as the “disclosing party,” and the learning party is known as the “receiving party.” For bilateral contracts, both parties act as disclosing and receiving parties – in this case, identifying the parties by their names or another means is acceptable. Once signatures have been recorded on the form, both parties must comply with all included conditions; if they fail to comply, they may face repercussions that may include being fired from their position, being faced with an injunction (a court order.  to stop an activity), or be required to pay damages.

What is Included in an NDA?

Pennsylvania’s Title 12 Chapter 53 is the state’s adoption of the Uniform Trade Secrets Act. It addresses how misappropriation is punished in the state and the remedies victims may take if their confidential information stolen and/or leaked. Notable sections of the act include:

Definition of “Trade Secret” (§ 5302): PA law states that the following can be considered a trade secret:

Statute of Limitations (§ 5307): Following the discovery of misappropriation (or when it should have been discovered), victims have three (3) years to bring up a case.