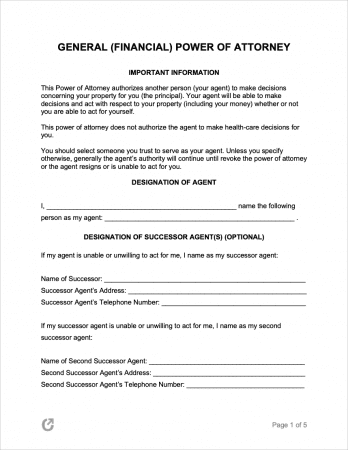 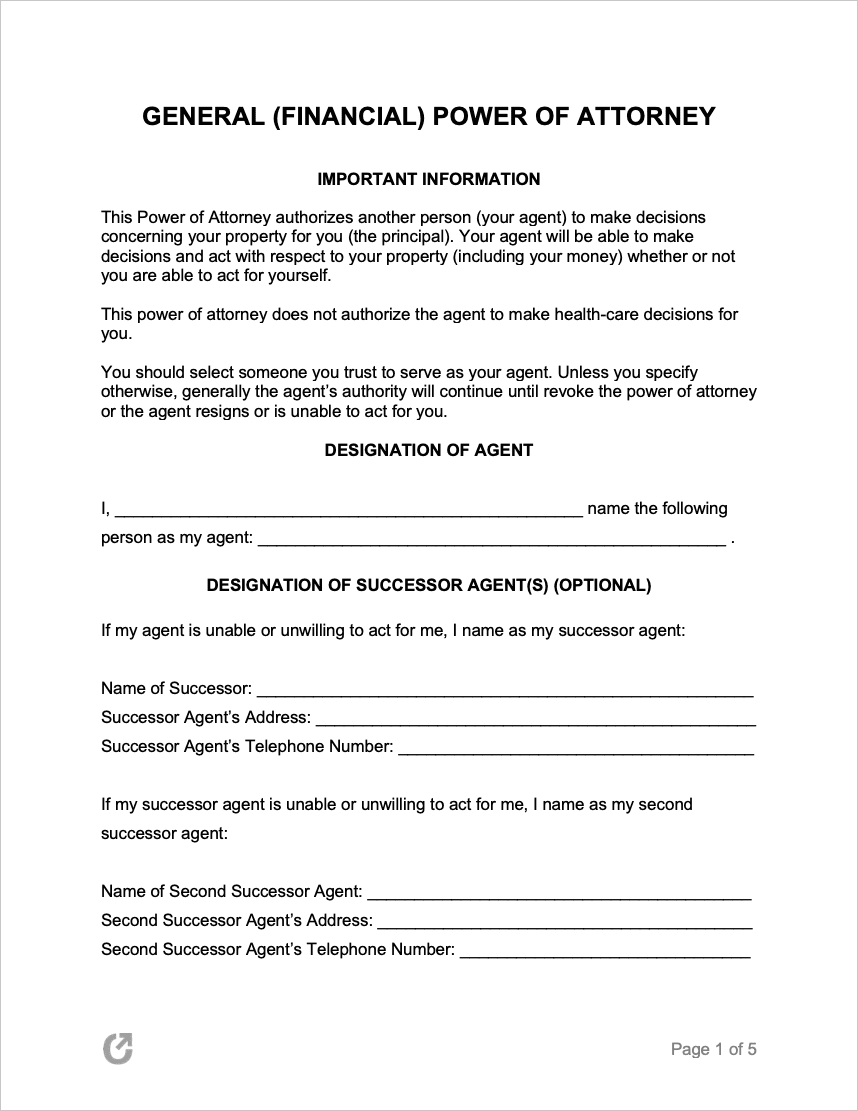 The General (Financial) Power of Attorney Forms are legal documents that are used for transferring decision-making powers regarding finances to a trusted person for a short or long period of time. The person transferring the power is formally known as the “Principal,” whereas the representative is known as the “Agent” or the “Attorney-in-Fact.”

Although the contents of the general POA are similar to that of the durable POA, they differ in the fact that the general POA will be automatically revoked in the circumstance that the principal can no longer make decisions on their own, a legal term known as “incapacitation.”

General Power of Attorneys by State

What is a General Power of Attorney?

A general power of attorney is a contract created between two parties, a principal and agent, that permits the agent to make financial decisions on the principal’s behalf. The legally-binding relationship created after the signing of the contract is non-durable, meaning the agreement will terminate in the case the principal were to succumb to a medical event that causes them to be incapacitated (a legal term for not being able to make decisions on their own).

People commonly use general POAs over durable POAs because they do not feel comfortable with the thought of someone managing their finances while they cannot oversee their actions. Having said, it is still entirely possible for an agent to misuse a principal’s finances for illegitimate reasons. To avoid selecting an agent that won’t look out for the principal’s well being, principal’s should choose an agent that is a family friend, family, or a reputable professional.

How to Get a Power of Attorney

Anyone who is seeking to get a General Power of Attorney can do so by following five (5) steps:

1. Choose who will serve as the Agent / Attorney-in-Fact

One of the most important decisions a principal can make is choosing who will serve as their agent. Technically, the agent can be any individual. However, it should be someone the principal believes will lookout for their best interests.

Once the principal has selected their agent, they may start filling out the general POA form. The form they use must reflect the Power of Attorney laws of their state.

4. Furnish a copy of the POA to the Agent

The Principal must provide a copy of the document to their Agent. Both parties must keep their respective copies in a safe place.

Both the Principal and Agent are legally required to duly uphold any provisions in the document that relate to them once it comes into effect.

How is a General POA revoked?

A Principal has the right to revoke a General Power of Attorney if they decide that they do not want or need it to be valid any longer. The Principal does not need to justify their choice, so long as they came to their decision free from duress and abide by any relevant state laws when revoking the POA.

All states recognize the execution of a Revocation of Power of Attorney form as a valid method of revoking a POA. However, each state’s laws regarding the lawful use of this legal form should be referred to by the Principal to ensure that they uphold any state-specific guidelines. For example, some states may specify particular signing requirements, whereas other states do not have any.

Several states also establish the destruction of a General Power of Attorney as a valid method of revoking it. While legally, this suffices to revoke the POA, it poses a number of problems in practice. For example, unless the Principal somehow makes a record of themselves destroying the POA, there will be no evidence that they did so. Due to this, it may be difficult for the Principal, the Agent, or another relevant party to prove that the Principal did indeed intend to revoke the POA.

Can a Power of Attorney be changed without consent?

A Principal has the legal prerogative to change the POA in any way they see fit, so long as it remains compliant with any relevant state laws. In order to change a Power of Attorney, the Principal must revoke the original form and lawfully execute a new POA form that includes any changes.

Whether or not the Principal needs to obtain their Agent’s consent to change it will depend on if the change involves naming a new Agent or maintaining the same Agent.

If the change involves naming a new Agent

If the change involves maintaining the same Agent

If the change will still involve the existing Agent, their consent is necessary because they will need to agree to and subsequently sign the new, changed POA. If the Agent does not consent to the changes, the POA will not be valid. This is because it is a fundamental legal requirement that all parties to it must consent to the terms of a Power of Attorney in order to lawfully execute it.

What does a General POA allow me to do?

A General Power of Attorney allows a Principal to legally delegate their financial tasks to another party of their choosing. The Principal is allowed to specify the tasks they want the Agent to take care of, with common ones including:

There are several benefits to this legal arrangement. Firstly, because a General POA is a contract, it binds the Agent to uphold certain legal responsibilities. Without a proper contract in place, it will be harder to hold them legally accountable. In the case the Agent breaks one or more provisions of the POA, the Principal will be allowed to pursue legal action for the damages and losses incurred.

Does a General POA need to be notarized?

Each state imposes their own definition of what constitutes as a valid General Power of Attorney. Many states require a General POA to be notarized in order for it to be valid in the eyes of the law. Some states require the form to be both notarized and witnessed by one or more witnesses, while others require one or the other. Numerous states do not require any notarization at all either because they do not mandate it or because state laws are silent on the matter.

If the Principal has the choice to notarize the Power of Attorney, they are strongly advised to do so. Notarizing a legal form acts as a way to authenticate its legitimacy as well as ensure that all parties involved are willingly entering into the Power of Attorney relationship with one another.

How long does a General POA last?

How long a General Power of Attorney will last is dependent on number of factors:

If the Agent has fulfilled the duties required of them as per the terms of the POA and it states that this will cause its termination, the POA will last as long as the duties have yet to be completed.

Revocation by the Principal

If the Principal chooses to revoke the General Power of Attorney, it will only last until it has been revoked by a method mandated by their respective state laws.

Incapacity or Death of the Principal

A General POA must include a clause that will render it inactive if the Principal becomes incapacitated. Any Power of Attorney will automatically extinguish upon the death of the Principal.

If the Agent withdraws from their duties, is not able to continue to serve the Principal, or they die, the General Power of Attorney will end. Unless, that is, a successor Agent has been named in the POA to take over the original Agent’s duties when they cannot or do not wish to continue them.