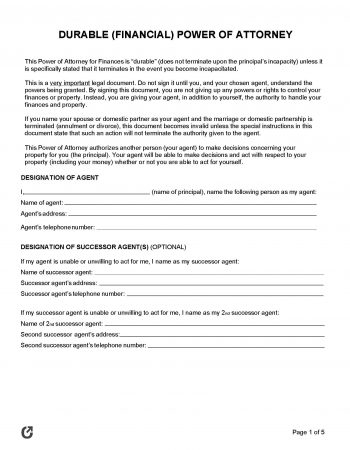 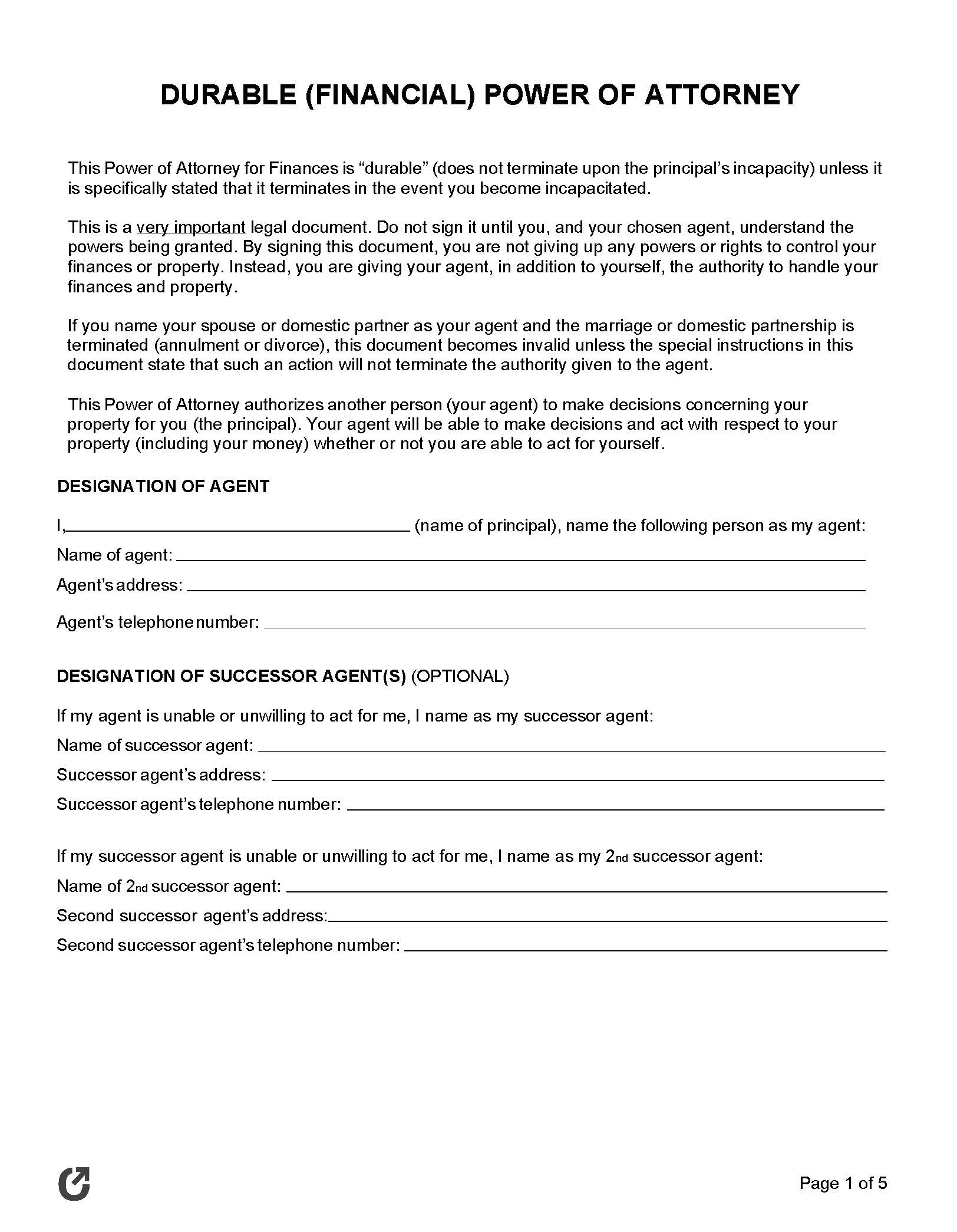 A durable (financial) power of attorney form is a legal document that gives an individual (principal) the power to appoint a trusted person or entity (the agent or attorney-in-fact) to manage their finances.

Being durable, the contract will remain in effect regardless of the principal’s mental state (be it incapacitation caused by Alzheimer’s, a brain injury, dementia, a prior disease, and so on).

What is a Durable Power of Attorney?

The defining feature of the form is that it is “durable,” which refers to the fact that if the principal were to become incapacitated (a term for being mentally handicapped), the powers granted to the agent in the POA will remain in effect. Thus, the form grants express permission for the agent to continue performing their duties to the principal regardless of the principal’s condition.

If (or when) the principal becomes incapacitated, the agent will be required to make critical decisions that are in line with any instructions the principal stated in the POA, as well as what they believe would be in the principal’s best interests.

The form contrasts with a General Power of Attorney, which is a type of POA that will cease to be effective in the case the principal becomes incapacitated.

How to get a Power of Attorney

The process of obtaining a POA is relatively straightforward:

The principal chooses their own agent to carry out the tasks and decisions in which they’ve requested. The individual or entity chosen should be responsible, trustworthy, and reliable. In cases where the tasks required of the agent require a varying level of knowledge or skill, it’s very important that the chosen agent has the required experience to make qualified, informed decisions. Family members, close friends, and professionals can all be selected.

DO NOT just write the agent’s name on the POA without consulting them first. Not only should the agent be willing to act as the agent, they need to have a complete understanding of the responsibility in which they will be granted. State laws require them to perform their “fiduciary duty”, which is the official term for only making decisions with the principal’s best interests in mind.

2. Fill out a Durable Power of Attorney

The principal will next need to complete a durable POA that is compliant with their state’s particular laws. If the principal needs decisions made in more areas than just financial-related decisions, they should choose the correct types of power of attorney form for their situation.

3. Ensure any signing requirements are followed

The principal will need to complete any state-mandated signing requirements. Many states require the presence of a Notary Public and/or one (1) or more witnesses in order for the form to be valid. When signing the contract, use an ink pen with either black or blue ink, with black ink being preferred.

4. Provide copies to all relevant parties

Once the form has been completed and all signatures recorded, copies of the POA will need to be distributed to all parties. At a minimum, both the principal and agent will need to hold copies of the contract after it has been completed. Additionally, it is wise that the principal make copies and give it to other family members and their attorney to ensure they have proof that the contract was entered formed. It is important to have proof of the POA to ensure the chosen agent is liable to the duties they are legally required to uphold.

When the contract comes into effect, all parties will be required to abide by its terms. State laws require that the agent act in the best interest of the principal, and only make decisions in areas that are strictly outlined by the agreement. In the event an agent abuses their power, the agreement should be terminated immediately, as the agent can face serious legal repercussions depending on the number of damages that resulted from their breach of contract (if any).

The following are a series of answers to questions that are commonly asked regarding durable POAs, and POAs in general. Because answers may vary depending on the state in which the principal is looking to create a POA – heading to a state-specific page may provide more tailored answers.

What does “incapacitation” mean?

“Incapacitation” refers to the state of the principal being physically or mentally unable to make and/or communicate decisions on their own behalf. In some states, a licensed physician is required to give an official written declaration that a principal is incapacitated. The written statement is then recorded in the principal’s medical file. Regardless of whether it is required by state law, principals should require that a physician make the determination that they are truly incapacitated to avoid POA from entering into effect prematurely.

Because each state’s laws provide a separate legal definition for the term, the principal should refer to the state definition to ensure they understand exactly what qualifies for becoming incapacitated.

What is covered by a Durable POA?

Does a Durable POA expire?

Unless the principal has included an expiration clause in the POA, it will only expire upon their death. With that said, it should be kept in mind that some entities, such as financial institutions, may not accept a durable POA that was executed a considerable time ago. While the contract may not have an expiration date, a person or institution may require an agent to obtain a newly created POA.

When does a Durable POA end?

A durable POA ends when an agent learns of the principal’s death or when a previously specified date is reached or circumstance occurs. Additionally, the principal can terminate the agreement by completing a revocation of power of attorney and sending it to everyone that was given a copy of the original POA.

In the case of the principal’s death:

In the case that an expiration clause is included:

In the case that the principal revokes the contract:

In the case the agent exits the agreement

There are some instances where the agent may choose to withdraw from the contract. State law permits the agent to do this so long the agent informs the principal of their decision and follows the requirements for exiting the agreement as stated in the POA. If there are no instructions in the original POA, the agent should resign from their position by giving the principal a formal letter of resignation.

Alternatively, the agent is automatically removed as the primary attorney-in-fact if they become incapacitated or pass away.

Does a Durable POA include medical?

Not typically. The “durable” part simply refers to the fact that the contract remains in effect if the principal cannot make decisions for themselves any longer.

Although it is possible to create a contract that encompasses both financial and medical powers, the principal should create two (2) separate contracts: both a durable POA for finances and a durable power of attorney for health care. Although it may be inconvenient, doing so ensures the principal’s medical and financial decisions are able to be legally granted to another person.

Theoretically speaking, it may be possible (at least in some states) for medical POA matters to be included in a standard durable POA. However, given the importance of creating clear and precise provisions and instructions, it is strongly advised that a medical power of attorney (also known as a “Power of Attorney for Health Care”) be used alongside a durable POA.

Start by downloading the POA in PDF or WORD.

Step 3 – Powers Granted to the Agent 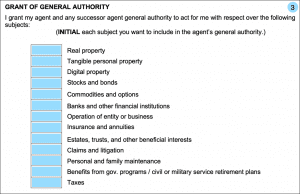 This field is optional. If there are any powers the principal wishes to grant authority over that are not included in the list provided in Step 3, write them in the lines provided. Initials do not need to be placed next to the powers assigned.

The principal has two (2) options to choose from in setting how the POA goes into effect. They are as follows:

Step 6 – Nomination of a Guardian

This optional section is used for nominating a guardian. It is very important to understand that guardians are court-appointed. By entering the information of a person, the principal is only suggesting that the person be their guardian. In the end, the courts have the full say over who becomes the principal’s guardian.

To complete the principal-specific fields of the POA, the principal will need to enter the following information:

Do not enter any information beneath the principal’s signature area. To be completed by a Notary Public ONLY.

This section is used for establishing the laws in which the agent is governed by. In the two (2) fields provided, enter the name of the state in which the principal resides.

In this section, the agent needs to write 1) both the state and county in which they are completing their section of the POA, 2) their name, 3) the principal’s name, and 4) the date in which the principal granted authority to the agent with the POA.

By writing the information above and their signature (Step 9), the agent states, to the best of their knowledge, that: 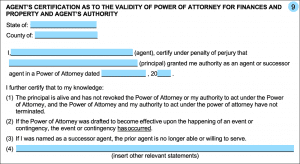 To officially (and legally) accept the responsibilities bestowed upon them by the principal, the agent will need to enter the following: