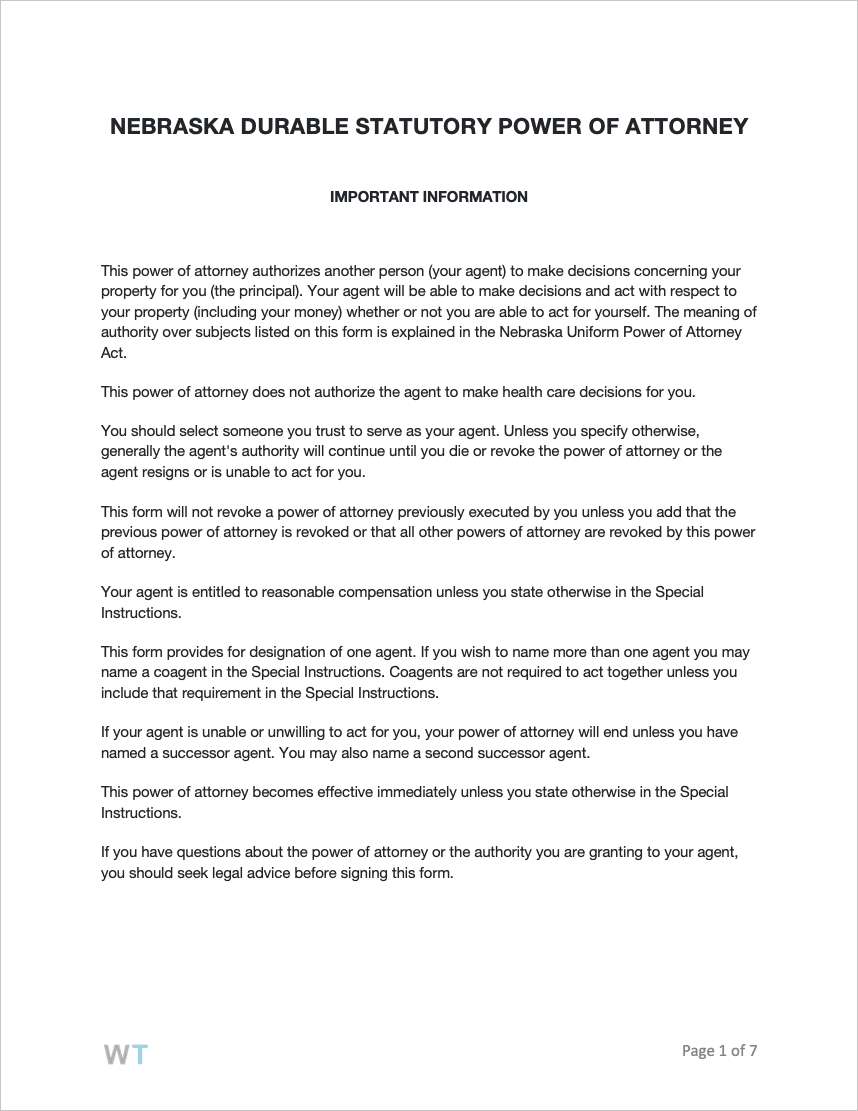 The Nebraska Power of Attorney Forms enable any individual, so long as they are not incapacitated, to exercise their legal right to appoint another party to oversee any matters that they cannot or do not want to manage on their own. The party who carries out the individual’s affairs must meet certain criteria in order to be granted such decision making powers. For instance, they must not be the owner or operator of the hospital or assisted living facility the individual currently, or will reside in.

Durable (Statutory) Power of Attorney – If an individual enacts a durable type of financial POA, it will remain in force in spite of their incapacity, should such a circumstance transpire.

General (Financial) Power of Attorney – It is up to the determination of the principal whether they wish for their financial POA to continue in the event of their incapacitation. If they do not wish for it to do so, they should opt for a general type of POA.

Health Care (Medical) Power of Attorney – This is a commonly used form as it provides a sense of security to the principal. It does so by guaranteeing that their health care choices will be followed should they one day enter a mental or physical state that prevents them from communicating such wishes themselves.

Minor Child Power of Attorney – Sets out the terms in which a parent or guardian may assign another party to take on certain responsibilities for the care of their child.

Motor Vehicle (DMV) Power of Attorney – The Nebraska Department of Motor Vehicles allows residents to exercise their choice to designate an attorney-in-fact to address certain affairs related to their automobile on their behalf.

Revocation of Power of Attorney – The reasons a POA may be terminated include the expiry of the its terms and the principal’s incapacitation or death. If the principal wishes to revoke the POA for another reason, they can do so using this form.

State Tax Filing Power of Attorney – A resident of the state may file this form with the Nebraska Department of Revenue to designate another party the authority to receive confidential information concerning their taxes so that they may manage certain tax affairs on their behalf.

What is a Nebraska Power of Attorney?

That is, unless the Principal has specified to the contrary in the contract, i.e. that it will become effective at a future date or upon the occurrence of a future event or contingency. If the POA will only become effective upon the Principal’s incapacitation, and they have not authorized a person to determine this, or the person who carries such authority is unable or unwilling to make the determination, it is necessary that their incapacitation is determined by a licensed physician, licensed psychologist, court, or an appropriate governmental official.