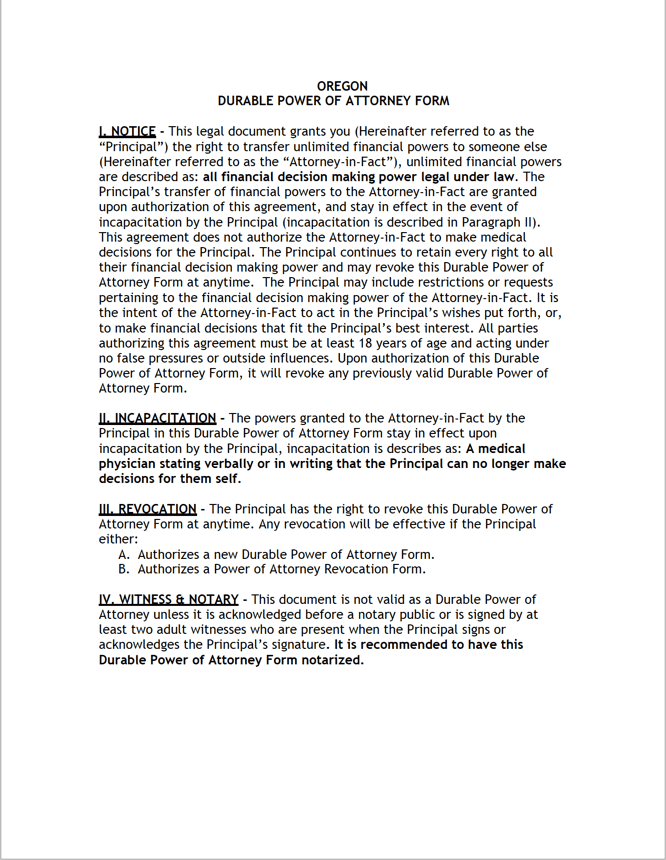 The Oregon Power of Attorney Forms are enacted by an individual (known as the Principal) so that they may legally delegate certain tasks and responsibilities to another trusted party (known as the Agent) that they do not have the time, expertise, or interest to do themselves. Or, in the case of filing an Advance Directive, the Principal does so in order to anticipate a circumstance in which they cannot communicate their own end-of-life wishes and will need someone to do so on their behalf.

Advance Directive (Medical Power of Attorney) – Oregon’s power of attorney laws make it possible for a capable adult to “designate in writing a competent adult to serve as attorney-in-fact for health care.”

Durable (Financial) Power of Attorney – A Financial POA of a durable nature allows for an agent to be responsible for handling affairs related to the principal’s financial assets both when they are in a legally capable as well as an incapable state.

General (Financial) Power of Attorney – A Financial POA of a general nature does not allow for an agent to continue acting in the principal’s stead once they are determined, at a future date, to be incapacitated or if they are pronounced dead.

Limited (Special) Power of Attorney – A type of POA that suppresses the scope of the decision making powers bestowed to an agent to only those specifically detailed in this written contract.

Motor Vehicle (DMV) Power of Attorney – The Oregon Department of Transportation, Driver and Motor Vehicle Services provides documentation that makes it possible for vehicle owners to nominate an agent to represent them in matters concerning their vehicle title and/or registration documents.

Real Estate (Property) Power of Attorney – This form comprises of four (4) options that an individual can choose from to indicate the way in which they want their agent to handle their real estate affairs.

State Tax Filing Power of Attorney – The Oregon Department of Revenue allows taxpayers to elect a person to represent them before the Department using this form, so long as that person meets the qualifications specified within.

What is an Oregon Power of Attorney?

An Oregon Power of Attorney outlines the necessary requirements for an individual to transfer a specified amount of control over their affairs to another party chosen by them. The state of Oregon has a comprehensive framework of laws that address numerous areas of POA arrangements as well as related matters, as established by the Oregon Revised Statutes, Chapter 127. When drafting a POA, it is important to refer to the correct set of laws to ensure full compliance with state law.

The law, specifically § 127.005, states that a General / Durable Power of Attorney POA will become effective “when executed and remains in effect until the power is revoked by the Principal.” That is, unless the POA states that it will only come into effect “at a specified future time, or will become effective upon the occurrence of a specified future event or contingency such as the principal becoming financially incapable.”

Signing requirements are stated for a Real Estate Power of Attorney. As specified by § 93.670, it is a requirement that this type of POA is acknowledged. The law also states that the contract “may be recorded in the county clerk’s office of any county in which the lands to which such power or contract relates is situated.”

For an Advance Directive / Medical Power of Attorney to become effective, Section 3 (3)(b)(B) establishes that the Principal and the Health Care Representative must sign it. It must also be witnessed and signed by two (2) witnesses or notarized.